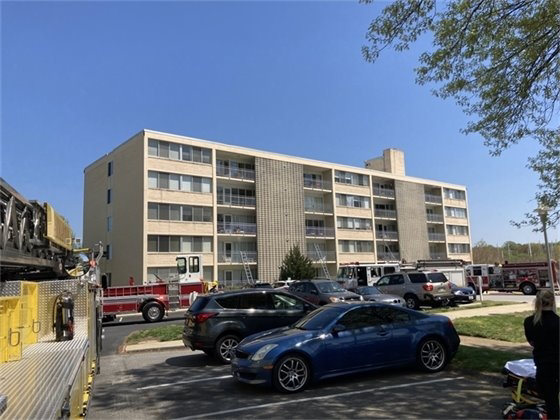 Officials with the Annapolis Fire Department have said a faulty furnace caused a fire inside an apartment community on American Drive.
On April 23, 2021 at approximately 12:41 p.m., the Annapolis Fire Department was dispatched for a reported structure fire. First arriving units found a 5-story garden style mid-rise complex with smoke showing from the back of the complex. The incident was upgraded to two alarms for additional staffing for evacuation of residents. Crews found a fire in the basement apartment furnace room coming from a gas leak. It was quickly extinguished and contained. The gas was shut off to the building. The building was evacuated but residents were able to return once BGE cleared the building to be reoccupied.
A total of 60 firefighters were on scene and took approximately 25 minutes to place the fire under control. One patient was treated for minor burns on the hands and refused medical transport.  One occupant was displaced at the time and was staying with family members.
Investigators from the Annapolis Fire and Explosives Services and Anne Arundel County Fire Investigators determined the fire to be accidental in origin and caused by a malfunctioning furnace. The total cost damage is approximately $50,000.