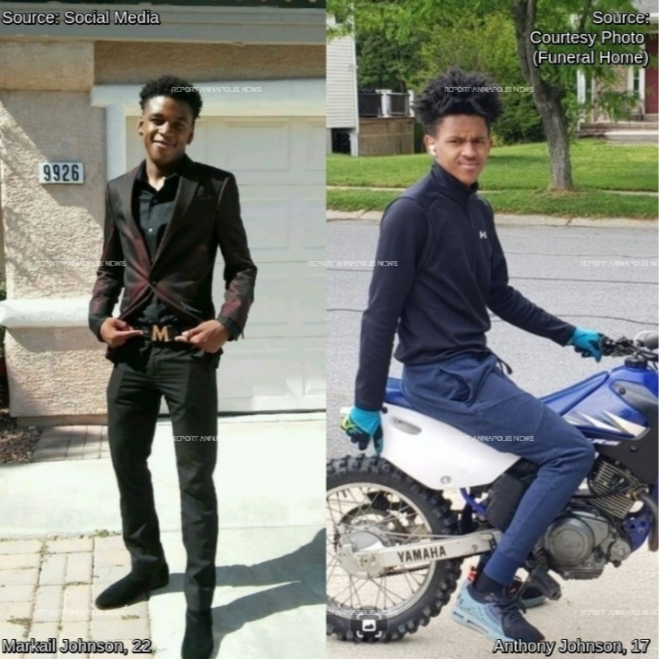 Anne Arundel County Police detectives continue to investigate the recent deaths of two young homicide victims.
The cases of 17 year old Anthony Tyrell Johnson (right picture), and 22 year old Markail Keaven Johnson (left picture), both of Glen Burnie, remain active and ongoing, according to Lt. Jacklyn Davis, a police department spokesperson.
Lt. Davis said the victims are not related and their cases are not believed to be connected.
According to a department press release, officers were called to the 100 block of Warwickshire Lane in Glen Burnie for shots heard in the area on June 1, 2022, at approximately 4:00 a.m.  Upon arrival, the officers discovered Anthony Johnson suffering from what appeared to be multiple gunshot wounds. He was pronounced deceased at the scene, police said.
Johnson was a Sophomore at North County High School. "The school has counseling services in place for students and staff," said a school system spokesperson.
Anne Arundel County Police Officers were called to the 600 block of Millwright Court in Millersville for a reported motor vehicle collision on June 2, 2022, at approximately 6:55pm, police department officials wrote in a press release.  Upon the officers' arrival, they discovered a black four-door sedan had struck two parked unoccupied vehicles.
"The driver of the sedan, later identified as Markail Johnson, had apparent upper body trauma not suffered as a result of the collision," officials wrote in the release. Police said despite life-saving efforts, Markail was pronounced deceased on the scene by fire department personnel.
Anyone with information about the deaths of Anthony Johnson or Markail Johnson are urged to call the tip line at 410-222-4700 or the Homicide Unit at 410-222-4731.