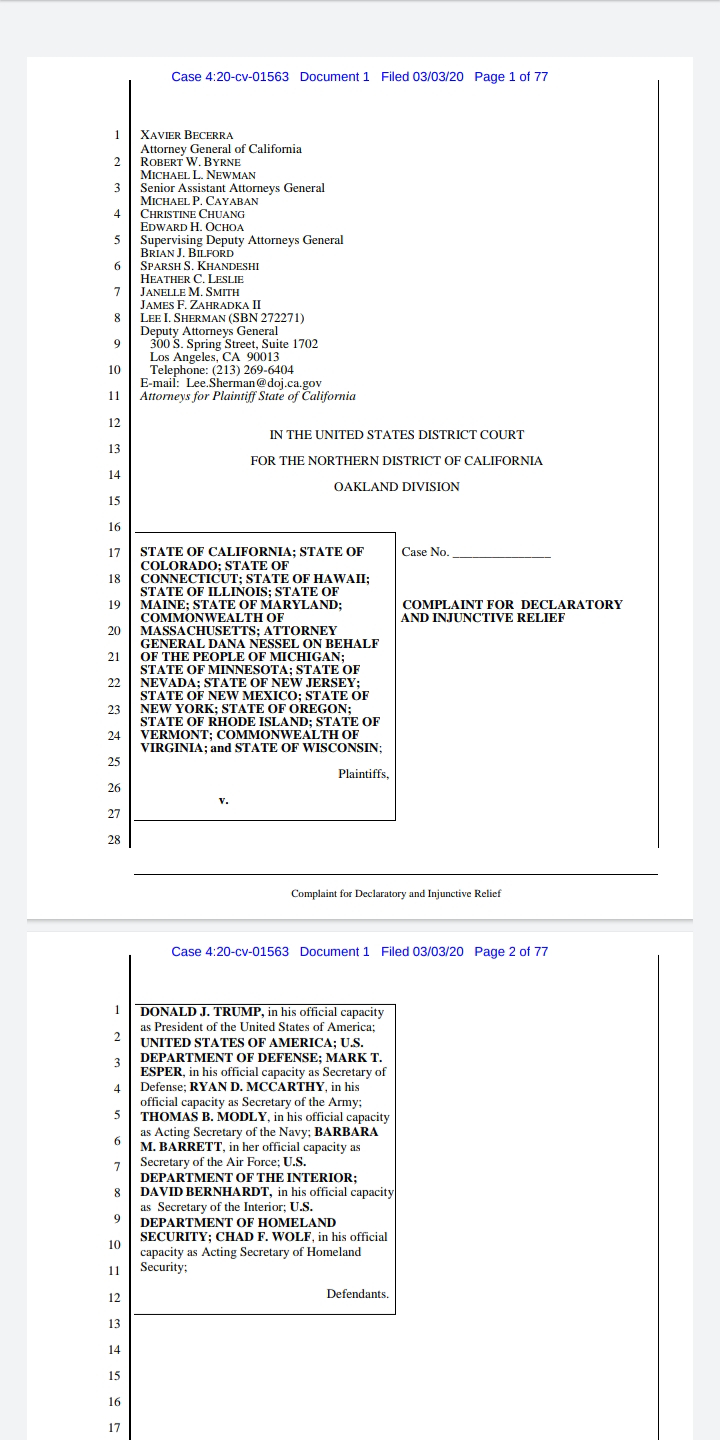 Maryland Attorney General Brian E. Frosh today joined a coalition of 19 attorneys general in filing a lawsuit challenging the Trump Administration’s illegal diversion of  $3.8 billion for the construction of an unauthorized border wall.  For the second consecutive year, the Trump Administration has circumvented Congress by redirecting billions of dollars appropriated for the procurement of military equipment and military construction projects in order to build a wall along the U.S.-Mexico border.  In today’s lawsuit, the coalition argues that the court should again rule that the Department of Defense’s (DOD) diversion of already allocated funds to the construction of the border wall is an unconstitutional violation of Congress’s appropriation power.
“President Trump’s attempt to divert funds to build a border wall is unconstitutional and an abuse of executive authority,” said Attorney General Frosh.  “Trump’s notion that a border wall will enhance national security is a fantasy.  On the other hand, reducing or eliminating funding for military construction projects and equipment endangers the safety of our citizens and members of our armed services.”
On February 13, 2020, the Trump Administration announced that it would redirect over $3.8 billion in funds that Congress appropriated to the DOD for resources and equipment for state National Guard units nationwide toward the construction of a border wall.  Congress has repeatedly rebuffed the President’s insistence on funding the border wall, providing limiting funding for fencing along the border in the 2019 and 2020 budgets.
Maryland has much at stake in this lawsuit.  Specifically, the Trump Administration intends to transfer billions of dollars Congress appropriated for procurement of F-35 and C-130J aircraft, which are produced by Lockheed-Martin, a defense contractor headquartered in Maryland.  The F-35 program is Lockheed’s largest, accounting or 27% of its nets sales in 2019 and expected to represent an even higher percentage of sales in future years.  Additionally, in FY 2020, Maryland stands to lose as much as $614 million in military construction funding that would otherwise flow into the state economy.  At-risk projects include the Presidential Aircraft Recapitalization Complex at Joint Base Andrews, a new operations building at Fort Meade, an air traffic control tower in St. Inigoes, and a U.S. Army Medical Research facility at Fort Detrick.
In the lawsuit, the coalition argues that the diversion of funds violates the principles of separation of powers, the Presentment Clause, and the Appropriations Clause of the U.S. Constitution by usurping Congress’s appropriation powers.  The coalition further asserts that the Trump Administration fails to satisfy the legal requirements necessary to divert the funds and disregards the National Environmental Policy Act by failing to consider the environmental impact of construction.  The diverted funds will be used to construct a wall on the borders of California and New Mexico, which poses imminent environmental harm to more than 100 sensitive plant and animal species.
In addition to Maryland, the suit was joined by the attorneys general of Colorado, Connecticut, Hawaii, Illinois, Maine, Massachusetts, Michigan, Minnesota, Nevada, New Jersey, New Mexico, New York, Oregon, Rhode Island, Vermont, Virginia, and Wisconsin.