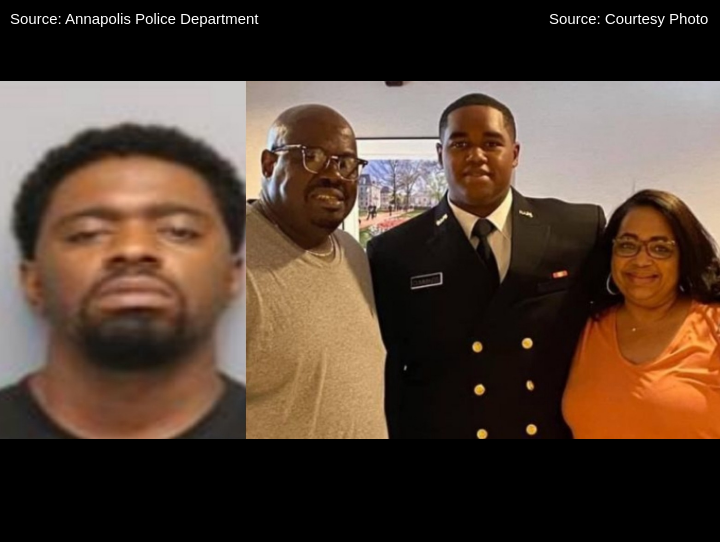 A trial is currently underway in the case of Angelo Harrod (shown above-left photo), the 31-year old Annapolis man who authorities have charged with murdering a U.S. Navy Academy Midshipman's mother last year.
The trial began on November 28 at the Anne Arundel County Circuit Court in Annapolis, and is expected to last nearly a month.
On June 29, 2021, at 12:21 a.m., officers responded to The Graduate Hotel located on West Street for report of a victim suffering from a gunshot wound. Officers arrived and located an adult female victim, later identified as Michelle Jordan Cummings (shown on the far right, orange shirt), 57. Officers and emergency medical services personnel attempted life saving measures, but Mrs. Cummings was pronounced deceased at the scene.
A preliminary investigation revealed Mrs. Cummings and her husband dropped off their son for the Naval Academy induction that day. Officials said she was sitting on a patio area at the hotel and was not the intended target.  It is believed the shots were fired on Pleasant Street and traveled a distance before striking her multiple times.
Harrod was subsequently indicted on sixteen counts, including first degree murder.
***Any suspects/arrested/charged individuals and persons of interest named in the articles are innocent until proven guilty in a court of law.***