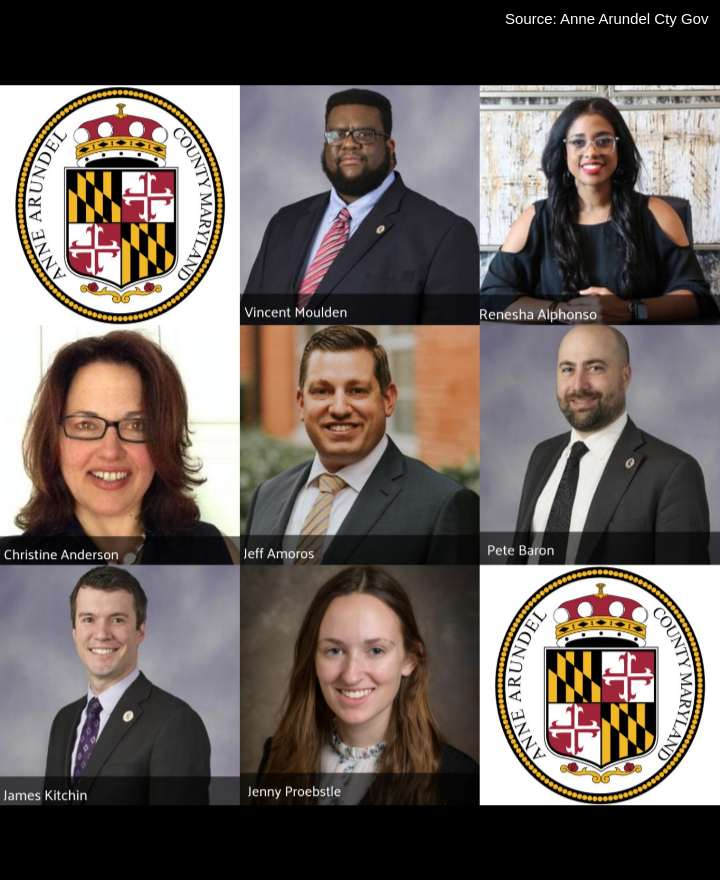 Anne Arundel County Executive Steuart Pittman has announced a series of promotions and staff changes in advance of the beginning of his second term.
Among other changes in senior staff, current Office of Central Services Director Christine Anderson will serve as the County’s Chief Administrative Officer, current Communications Director Jeff Amoros will serve as Chief of Staff.
Anderson, a seasoned veteran of local and state government posts, has led the Office of Central Services since 2015, where she managed County facilities, fleet, procurement, and other essential functions of County operations. As Director, she has been leading the implementation of the electric vehicle program for the 2,100-vehicle County fleet.
Amoros joined County Executive Pittman’s administration after serving in a variety of roles in Baltimore City government, including with the City Council, the Mayor’s Office, and the Health Department, and also brings experience from a variety of state and local political campaigns. He led Baltimore City’s Joint Information Center during the first year of the pandemic.
“I am excited to announce a series of staffing promotions and changes that position us well for our second term,” County Executive Steuart Pittman said. “I am proud to be able to elevate so many of our staff from within. It shows we have a deep bench of dedicated and talented public servants continuing to make Anne Arundel County The Best Place - For All.”
The County Executive also announced a number of other key senior staff promotions:
Current Director of Government Relations Director Pete Baron will serve as Chief Strategy Officer. Baron is a former legislative director for both the Maryland Hospital Association and the Service Employees International Union, Maryland and DC State Council, and served in Speaker Mike Busch’s office. In his work for the County, he has advanced the County Executive’s legislative agenda at the federal, state, and local level while serving as a key policy advisor.
Deputy Communications Director Renesha Alphonso will take over as the administration’s Communications Director. Alphonso’s background in nonprofit communications and the government sector has helped refine messaging and implement a more data-driven approach to multimedia communications.
Community Engagement and Constituent Services (CECS) Assistant Director Vincent Moulden will become the CECS Director. A lifelong resident of Anne Arundel County with over a decade of experience developing innovative engagement campaigns for non-profit associations, Moulden has played an integral role in expanding digital engagement efforts and nurturing meaningful relationships in the community.
CECS Director James Kitchin will serve as the Director of Research and Special Initiatives. A long-time resident of Crofton, Kitchin’s graduate studies include a wealth of experience in public policy research focused on local governments, education, and immigration policy.
Communications and Policy Specialist Jenny Proebstle will become Deputy Chief of Staff. Proebstle joined the Pittman administration in 2019, and has led the administration’s digital content creation work, including playing a key role in the county's public outreach and rapid response efforts throughout the COVID-19 pandemic.