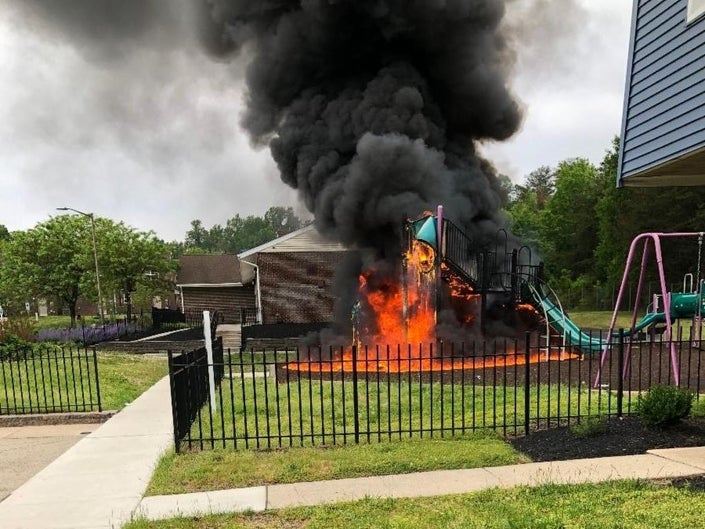 Anne Arundel County Fire investigators needs help indentifying suspects in connection with Pasadena Boys and Girls playground fire.
On Sunday evening, Firefighters responded to multiple 911 calls reporting the playground on fire near the 7800 block of Willing Court. First arriving firefighters reported the residential playground, consisting of plastic and metal with a rubber mulch base, fully involved in fire. The fire was brought under control in about 10 minutes. The heat of the fire partially melted siding on two nearby homes.
Investigators have determined that the fire was intentionally set. Through their continued investigation, they obtained evidence and a video from a community camera. Investigators are now seeking the public’s help in identifying the persons believed responsible for the arson fire. The primary suspects are the two taller males in black clothes that walk in from the bottom right-hand corner of the video. One suspect turns and looks at the camera at the beginning of the video and then remains standing at the gazebo. The second suspect turns and runs towards the camera near the end of the clip.
Anyone who can identify the subjects in the video or who may have seen anything unusual in that area or have photos or video of the fire are asked to contact investigators. They may be contacted at the TIPS line at (410) 222-TIPS or by using the online form. Individuals may remain anonymous using either means of contact.