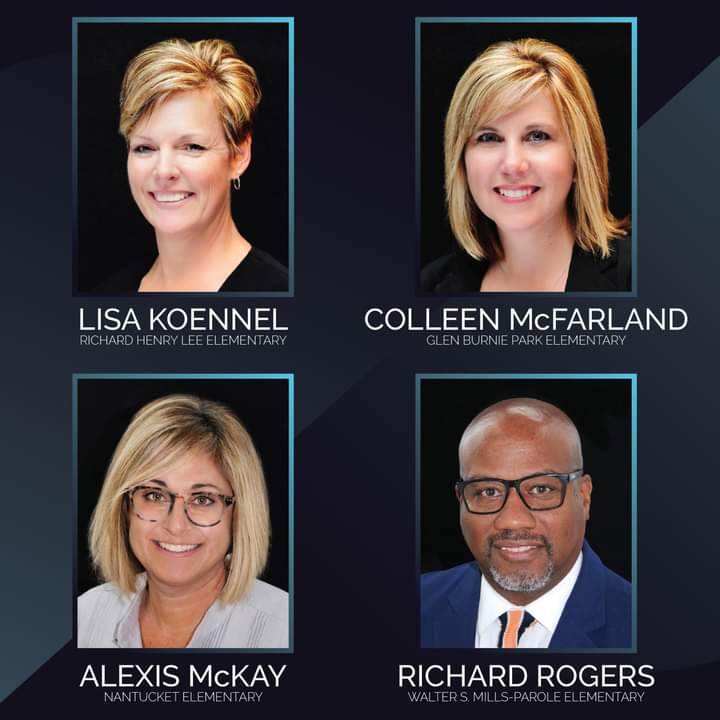 Four principals – all leaders at the elementary level – have been selected as finalists for the 2022-2023 George Arlotto Leadership Award, given annually to the Anne Arundel County Public Schools Principal of the Year.
The finalists, determined by AACPS’ Office of School Performance, are:
Lisa Koennel, Richard Henry Lee Elementary School
Colleen McFarland, Glen Burnie Park Elementary School
Alexis McKay, Nantucket Elementary School
Richard Rogers, Walter S. Mills-Parole Elementary School
The winning principal, who will be announced in December, will represent AACPS in the 2023 Washington Post Principal of the Year program. All four finalists will be honored at the Excellence in Education Awards Ceremony, hosted by the Education Foundation of Anne Arundel County Public Schools, on Thursday, April 20, 2023, at Live! Arundel Mills.
The award was bestowed for the first time last year to Tyler Heights Elementary School Principal Julia Walsh. It was renamed by the Foundation in June in honor of Dr. Arlotto, who approached the Foundation in 2021 about creating an awards program to recognize the outstanding principals in AACPS. Dr. Arlotto served AACPS for 16 years, the final eight as Superintendent.
Ticket information and sponsorships for the Excellence in Education Awards, which will take place at Live! at Arundel Mills, will be available in mid-December.