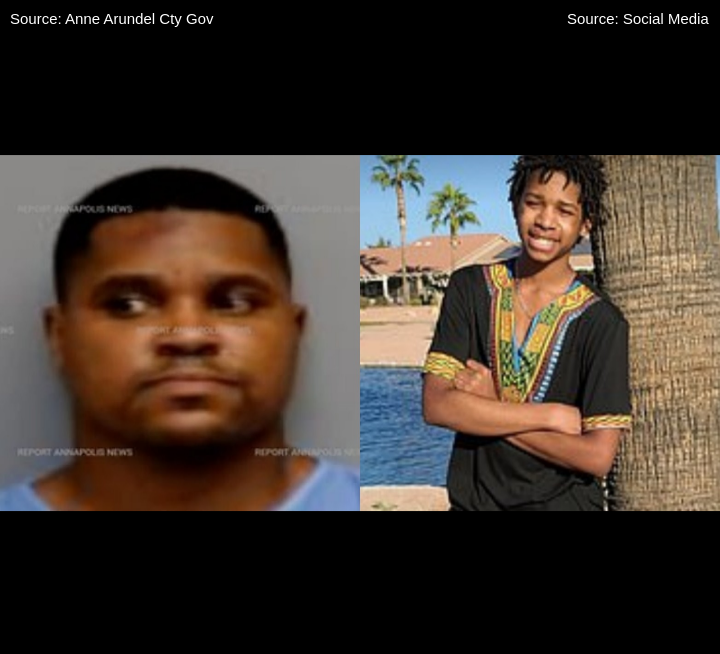 An Anne Arundel County Circuit Court judge has accepted the alford plea of a Baltimore Police Officer whose stepson was found dead last year inside his Pasadena area home.
This morning, Officer Eric Glen Banks, 35,  (left photo) entered an alford plea in connection with the murder of his stepson, Dasan Jones (right photo).  Banks' alford plea to second degree murder and attempting to disarm a police officer allows him to maintain his innocence while also acknowledging prosecutors have enough evidence that could have been used to find him guilty at trial.
According to a spokesperson for the Baltimore Police Department, Officer Banks is still employed with the department, but is currently suspended without pay. "With Mr. Banks’ sentencing scheduled to occur later this year, we will not provide any additional statements at this time," the spokesperson said in a statement.
Sentencing has been scheduled for December 9, 2022.
On July 16, 2021, Anne Arundel County Police officers found the body of 15-year old Dasan James Edward Jones, who was affectionately called "DJ" by close friends and family, at a residence on the 1400 block of Stoney Point in Rivera Beach, just outside of Pasadena. Officers immediately began rendering aid until relieved by fire department personnel, but efforts at resuscitation were unsuccessful.
Officials said Banks was present at the scene, became combative and tried to disarm one of the responding officers. That officer requested assistance, several additional officers responded and were able to help take Banks into custody safely. During his altercation with police Eric Banks stated, “My life is over” and “choke me choke me."
Investigators said several search warrants were executed and multiple items of evidence were collected. Apparent bloody clothing was reportedly located which had been found in a dresser drawer.
On Tuesday, July 13, 2021, the Office of the Chief Medical Examiner ruled Dasan Jones cause of death as asphyxiation with the manner being homicide.
A source who knew Dasan spoke to Report Annapolis on the condition of anonymity shortly after the news of his death spread quickly through the community. "Dasan was a smart child with a bright future," the source said.  "He deserved so much better."
Dasan was reportedly very well known within the student body at Glen Burnie High School where he was enrolled in the school's magnet program.
"Dasan Jones was a bright young man with a promising future. He had been awarded the Presidential Golden Award for Outstanding Academic Excellence, Schola Award and Goal Oriented Award for Orchestra. He was an excellent violinist, an avid gamer and was learning the Spanish language. His goal was to be a General Surgeon. Dasan loved to garden, and enjoyed all food, especially sushi and Mexican food," to an online obituary said. "He was immensely loved by his family, especially being a big brother, his friends and teachers. He will be sorely missed."
State's Attorney Anne Leitess released the following statement:
“There are no words to adequately describe the loss Dasan (DJ) Jones has had on his family, friends and the Anne Arundel County community. DJ had a life filled with promise and purpose. As a rising sophomore at Glen Burnie High School, he was enrolled in the magnet BioMedical Allied Health Program and a member of the all-county orchestra as a talented violinist. DJ was excited to participate in the high school program because he wanted more challenging work.The budding life of this young man was extinguished by his stepfather, likely to punish and hurt his estranged wife who was granted a protective order against him just hours before.  DJ was to leave the home that day and go with his mother. I hope that his death will shine a light on the reality of the danger that children face when the adults around them are in a crisis and that we take that risk seriously. If you or someone you know is at risk for domestic violence, please call the Anne Arundel County Domestic Violence hotline at 410-222-6800.”