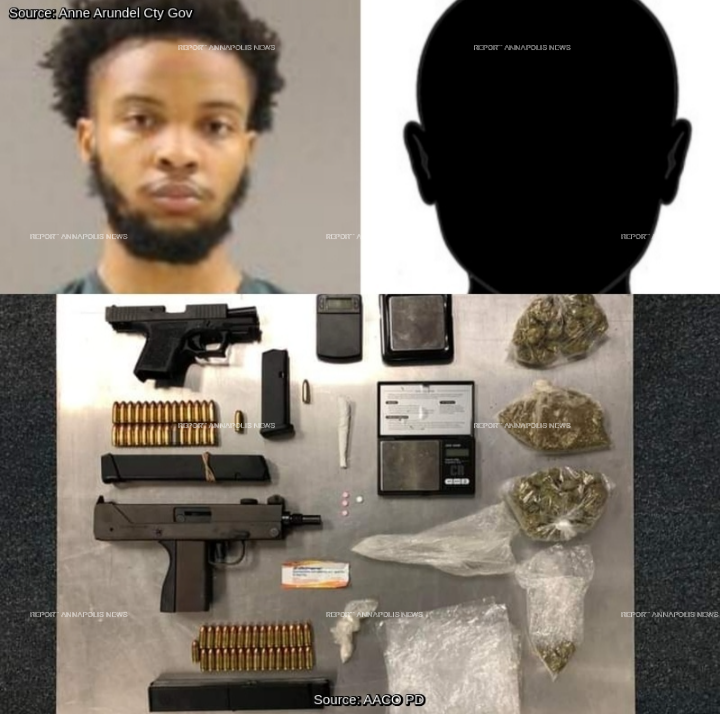 A man from Odenton and a local teen were reportedly arrested following the seiure of drugs and guns by patrol officers in Glen Burnie.
The Anne Arundel County Police Department said on September 20, 2022, at approximately 9:00 p.m., detectives were on patrol in the area of Faywood Court and Faywood Avenue when they witnessed someone rolling a cigarette. As detectives neared the subject, they observed a rolled marijuana cigarette and a bag of loose suspected marijuana within his reach, department officicials said in a press release.
"As detectives began to address the subject, he turned away from them, exposing an open satchel he was carrying. Detectives observed a large bag of suspected marijuana within the satchel," the press release states. "The subject was detained by officers, and a subsequent search of the subject and the satchel yielded a loaded black semi-automatic handgun, a magazine with ammunition, approximately 85g of suspected marijuana, three digital scales, 1 plastic bag with approximately 2g of suspected crack-cocaine and heroin/fentanyl."
Authorities say while detectives were conducting their investigation into the first subject, they encountered a second subject, a 15-year-old male, who was found to be in possession of a loaded black submachine gun.
A check through state databases revealed that neither of the firearms was registered. Both subjects were arrested, charged accordingly and indentified as:
Jahreel Browning-McKinley (shown above)
21-year-old
Odenton Maryland
15-year-old male (not pictured)
Glen Burnie, Maryland