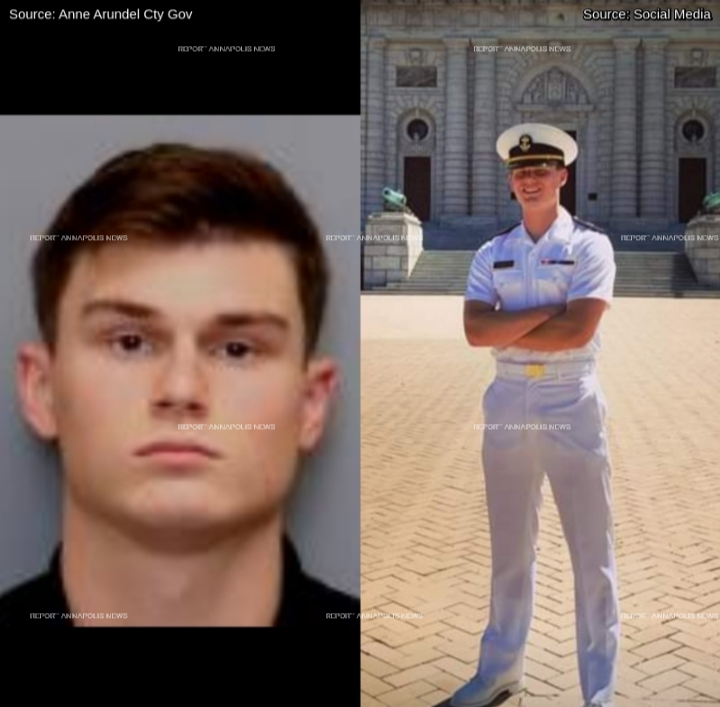 The U.S. Naval Academy midshipman accused of raping a fellow midshipman last year has been found not guilty after a multi-day jury trial.
On September 21, 2022, Garrett Lee Holsen (shown above in both photos), was acquitted on the charge of first degree rape. Other charges had been dismissed.  Holsen, a 21 year old native of Wisconsin, was arrested in November and later released after posting a 25,000 bond.
According to a spokesperson for the academy, Holsen retained his status as a midshipman at the U.S. Naval Academy throughout the trial.
On June 21, 2021, an officer with the Annapolis Police Department received a telephone reporting call related to a sex offense that occured on Colonial Avenue on May 23, 2021, court documents say.  The officer was advised that the Naval Criminal Investigative Service (NCIS) had been investigating a sex offense between two Naval Academy midshipman.  A 19 year old midshipman reportedly stated she had been raped while attending a party held after the Herndon Monument Climb, documents show. "The party consisted of numerous midshipmen who were consuming alcohol beverages," a detective wrote.
Charging documents indicate Holsen's accuser said the rape, which allegedly had been been witnessed by a friend of the accuser, happened inside a bathroom where she had gone to vomit due to her level of intoxication.
Holsen vehemently denied the rape claim, maintaning the sex act was consentual.
Authorities did not seek to arrest and charge Holsen in connection with the allegations until November 30, 2021, more than five months after receiving the report a NCIS special agent.