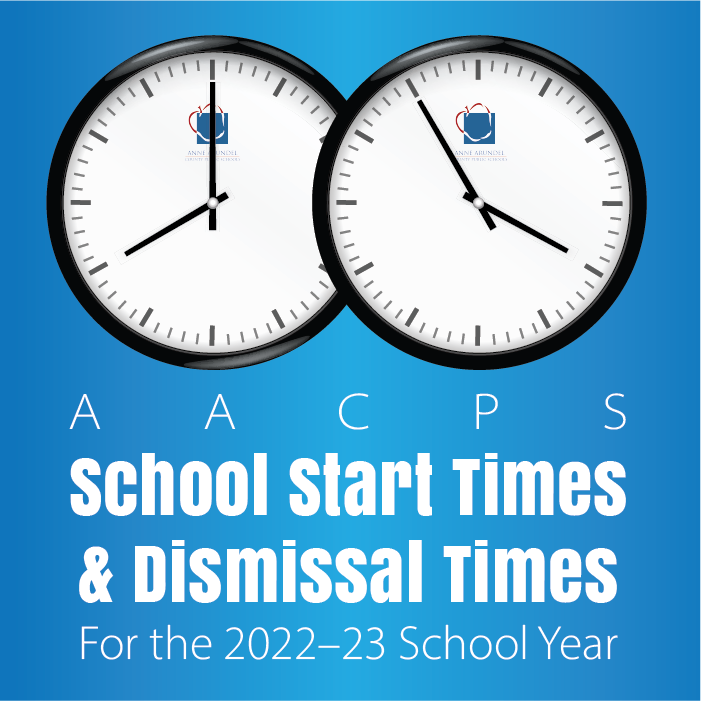 Anne Arundel County Schools are expected to implement later start times during the upcoming school year.
Officials say classes will begin at 8:30 a.m. at all comprehensive high schools, 9:15 a.m. at all comprehensive middle schools, and between 8 and 8:30 a.m. at all comprehensive elementary schools next year under a preliminary schedule of school hours recently released.
The schedule largely puts in place a plan adopted by the Board of Education earlier this school year to shift to healthier school start and dismissal times for students when classes begin in August. A complete schedule can be found at www.aacps.org/2223schoolhours. Some minor alterations to start and dismissal times due to traffic concerns, road construction, or other issues may take place over the next few months.
“While there may yet be some small shifts in school hours, it is important to provide this information now so that families, employees, and the community can begin to make the necessary adjustments to their lives,” Superintendent George Arlotto said. “A shift in school hours will create healthier environments for all of our students, but it is also a sea change to which families, employees, and the community will have to adapt.”
Start times for developmental centers, early education centers, the Mary Moss @ J. Albert Adams Academy, the Phoenix Academy, and the Centers of Applied Technology North and South can also be found on the above page. School hours for contract and charter schools, which make their own transportation arrangements, are set by those schools.
Information regarding Pre-Kindergarten, ECI, Exploratory Programs, and Extended Day Programs will be added to the site at a later date.
Prismatic Services, Inc., with which the Board contracted to find efficiencies in the student transportation system, is still working with Anne Arundel County Public Schools staff to finalize bus stop times and locations. Those times and locations will be released later this year.
Virtual information sessions led by Board members will be held over the next few weeks. A schedule of those sessions, which will be streamed on AACPS’ YouTube channel, will be posted at www.aacps.org/2223schoolhours when it is finalized.