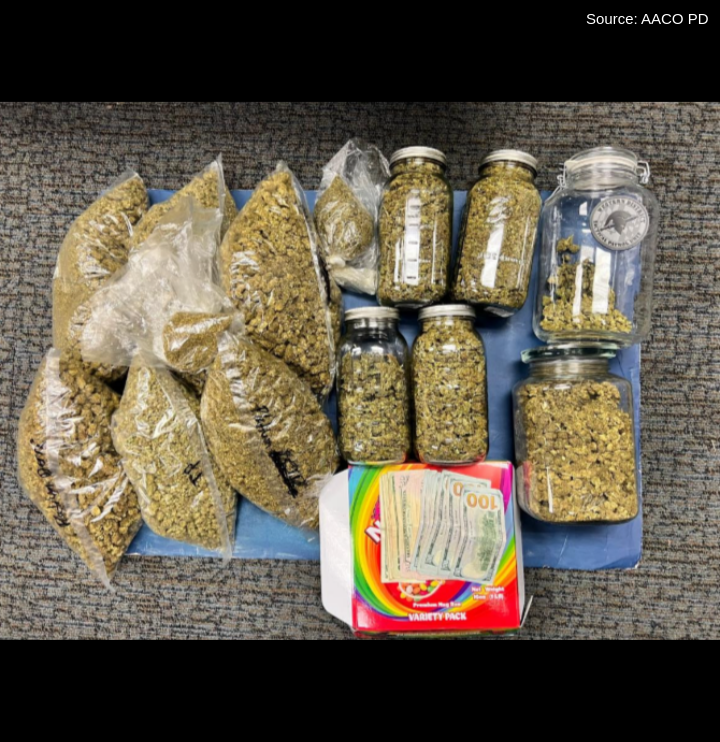 The armed robbery of a store in Laurel last week led to the discovery and seizure of pot during a subsequent raid.
The Anne Arundel County Police Department said on November 11, 2022, at approximately 7:30 p.m., officers responded for a citizen robbery at the Dollar Tree located at 3401 Laurel Fort Meade Road.  In a press release, department officials said the 19-year-old male victim was there with two male associates to purchase a controlled dangerous substance from three male suspects.
"The victim’s associates paid the suspects with fake currency and fled, leaving the victim behind. The suspects assaulted the victim by striking him with a pistol and punching and kicking him," the press release said. "All of the victim's property was taken to include his clothes. The victim was able to get away and was later transported to an area hospital with non-life-threatening injuries."
Through investigative means, detectives reportedly identified one of the suspects and located him at his residence in the 200 block of Red Clay Road in Laurel. According to law enforcement sources, a search warrant was executed at the apartment resulting in the seizure of the following pieces of evidence:
Glock 17 handgun w/ 11 live rounds
black handgun
23 pounds of marijuana w/ packaging
5.5 pounds of THC wax w/ packaging
$1,189.00 in U.S. currency
1 large digital scale
1 small digital scale
CDS packaging
Markell Joyner, 24-year-old, of Laurel, Maryland, was arrested.  The outstanding suspects are identified as:
1- Black male, 5'8-5'10, 19-26 years of age, wearing a white tank top, black pants with a tattoo of an eye on his left arm
2- Black male, 5'8-5'10 19-26 years of age, heavy set
***Any suspects/arrested/charged individuals and persons of interest named in the articles are innocent until proven guilty in a court of law.***