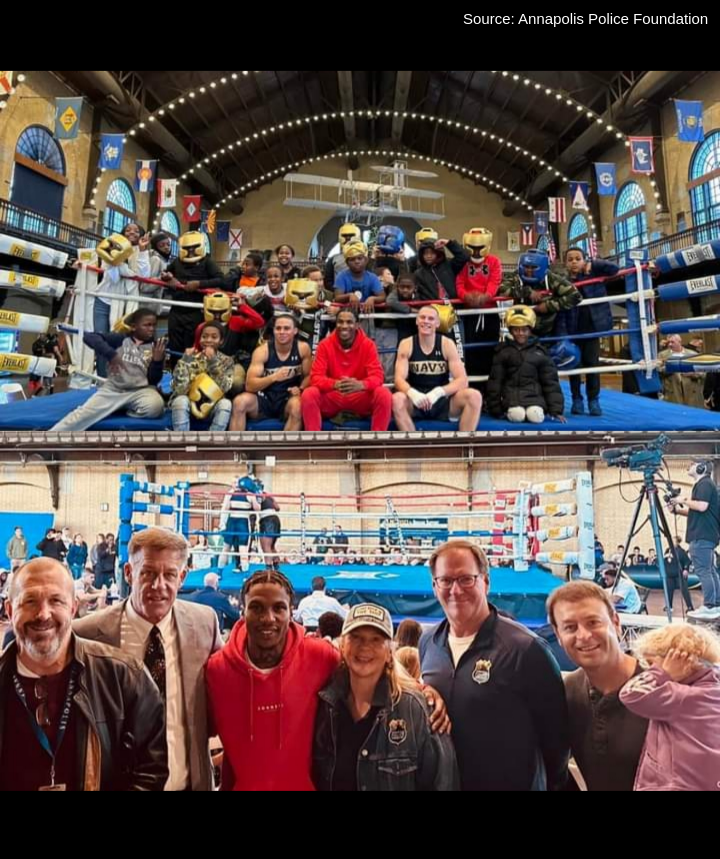 City leaders will celebrate the grand opening of  “Cut Different Boxing,” a new fitness program for Annapolis youth, with a ribbon cutting and exhibition at 5 p.m. on Monday, Jan. 9, 2023 at the “Pip” Moyer Recreation Center. The public is invited to attend.
In 2021, Mayor Gavin Buckley, Police Chief Ed Jackson and Recreation and Parks Director Archie Trader began discussions on how to bring a formal boxing program to Annapolis. In early 2022, when the United States Naval Academy’s boxing program was being relocated, a boxing ring that was headed for salvage was offered to the City. Annapolis Police Foundation board member Peter Grimm facilitated the offer, transfer and setup of the ring to the City’s Rec Center.
Annapolis Recreation and Parks received the ring and spent a year brainstorming, fundraising, and strategizing on how to establish the program. The program will begin with Annapolis native and professional boxer Sean “Rocky” Cormier as manager.
Buckley credits the Annapolis Police Foundation, Annapolis Police Department, US Naval Academy Athletics, and the Recreation and Parks Department for coming together to launch the program and establishing accreditation through the South Atlantic Boxing Association, a division of USA Boxing and the Police Athletic League.
“It took us some time to get here, but I know this program will be great for Annapolis youth,” Buckley said. “Boxing requires discipline. It demonstrates how to overcome obstacles and adversity. It’s also an amazing workout and it’s fun!”
Cut Different Boxing will include three main elements: education, physical conditioning and boxing. The students must complete all their studies before entering the ring, and tutoring will be made available.
Along with Cormier, USNA Head Boxing Coach Jim McNally, USNA Boxing Instructor Adan Salguero, Annapolis Police officers, and midshipmen from the Navy Boxing Team will donate time and talents to teach pugilistic art skills to the students in the program with the hope that those connections between coaches and athletes will serve as mentorships and forge lifelong friendships.