'He was our heart and soul:' Owner of Ann's Dari-Creme in Glen Burnie Has Passed Away, The Company Announced 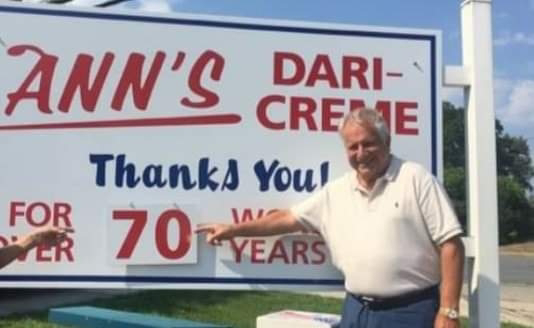 Howard Samuel Pinskey, an Annapolis resident and owner of Ann's Dari-Creme, has died, the company announced today.
Mr. Pinskey passed away on Sunday, January 31st with his family by his side. He was 81.
The company said Pinskey was the heart and soul of Ann’s, a Maryland fixture located in Glen Burnie for over 70 years. "He was always so thankful to the staff and patrons."
According to an online obituary: Mr. Pinskey graduated from the United States Naval Academy in 1962 with a Bachelor of Science degree in Engineering (electrical). He served on active duty and in the Navy Reserve for 21 years, retiring in 1983 with the rank of Commander. He is the only USNA Class Secretary of the Naval Academy to serve as Secretary for over 60 years.
Howard's professional career has been primarily in the fast-food restaurant business and in real estate development. Since 1983, he has been involved in all aspects of the restaurant business having been associated with over 47 food establishments.
Howard was the ultimate Navy football fan and could often be heard shouting from his box on the 50 yard line "GO NAVY".
Howard is survived by his loving wife of 55 years, Thea, his sister Raleigh Pinskey, his nieces Cindy Siesel, Amy Applestein (Brian) and Stacy Frazier (Dwayne) and his beloved great nieces and nephew, Jaclyn, Bridget, Tori, Karli and Logan.
A private family service will be held at the Uriah P. Levy Center and Jewish Chapel with interment at the Naval Academy Columbarium.
"The best way to honor Howard’s memory is to come by, get a double dog and toast him with a milkshake," the announcement reads.  "Howard, we’ll keep going for 70+ more years for you!"