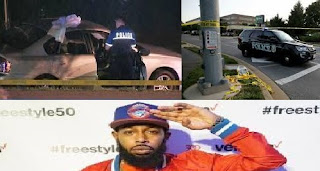 A grand jury in Anne Arundel County handed down a lengthy indictment against James Esau Davis, the Baltimore man who was arrested and charged in connection with the fatal shooting of a gregarious Annapolis native and promising rapper, Edward Montre Seay, also known as 'Tre Da Kid.'

The twelve-count seven page indictment summary obtained by Report Annapolis  outlines the charges against Davis, which includes conspiracy to commit murder in the first degree and accessory after the fact.  The conspiracy charge alone carries a life sentence.  Prosecutors nor lawyers for the defense have yet to release potential motives that led up to the loss of a revered life that sent painful echoes of grief across every square foot of Annapolis.  James Davis will continue to be held without bond at the Patuxent Institution, a maximum security treatment oriented facility in Jessup Maryland which treats more than 1,000 inmates with various mental health and substances abuse needs.

It took Detectives with the Annapolis Police Department less than two weeks to make an arrest after it had been determined that 32 year old Seay was shot to death while driving his vehicle outbound on Forest Drive the night he died. According to charging documents, on Friday, June 7, 2019 at approximately 9:19 pm, APD officers and detectives responded to the intersection of Forest Dr and South Cherry Grove Avenue for the report of a shooting. The victim, Edward Montre Seay, also known by his rap stage name "Tre Da Kid" was found in the driver's seat of his vehicle suffuring from a fatal gunshot wound.  He was pronounced dead at the scene by the Annapolis Fire Department. A primary witness to the investigation, who was in the front-passenger seat of Mr. Seay's vehicle at the time of the shooting, stated the gunshots were observed coming from the rear driver side of the vehicle which was traveling to the right of Mr. Seay's vehicle. The witness positively identified the driver of the vehicle as James Esau Davis, 30, of Baltimore Maryland. Davis was arrested on June 20, 2019; only 3 days after the charging documents and arrest warrant was issued. The Office of the Anne Arundel State's Attorney Anne Leitess would not comment on the status of the investigation into the indentity and arrest of the gunman. "It is the policy of this office not to comment on pending cases," said Tia Lewis, a spokeswoman for the State's Attorney.

The trial is scheduled to last at least 8 days starting October 28, 2019 at the Circuit Court in Annapolis. Judge Glenn Klavans is expected to preside over the trial.