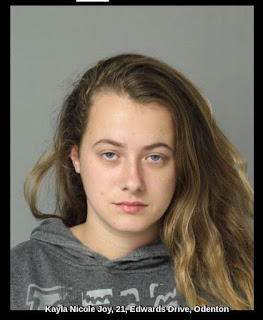 Ms. Joy was reportedly driving a 2013 GMC Box Truck with a blood alcohol level of .12, and therefore was legally drunk when she struck the 2004 Harley Davidson.

".08 is the legal limit for driving under the influence (DUI)," said County Police Spokesperson Lieutenant Jon Mahaffee. "Driving while impaired (DWI) can still be charged though if one is below a .08 if they show signs of impairment," he explained.

Officers investigating the accident were able to determine that Ms. Joy failed to yield to the right of way of the victim. Investigators were also able determine that Ms. Joy was under the influence of alcohol at the time of the crash. First responders pronounced Mr. Vangenderen dead shortly after arriving on the scene.

Police did not disclose the identity of the passenger riding with Ms. Joy at the time of the accident. Neither Ms. Joy nor the passenger was injured. Both Ms. Joy and the passenger remained at the scene, although it is not clear who made the 911 call. Police were not able to confirm if Ms. Joy or the passenger attempted to offer Mr. Vangenderen any aid or made any attempts at rescuitation while awaiting for authorities to arrive.

According to court records, Ms. Joy has received more than a half dozen traffic citations in the 3 years preceeding this accident. Once taken into custody on Wednesday, Ms. Joy was served a warrant for failing to appear at court in July on multiple traffic violations, including failure to control vehicle speed on highway to avoid a collision. Court records also indicate that Ms. Joy's driving privileges were suspended at the time of the accident.

Ms. Joy is currently being held without bond at the Jennifer Road Detention Center in Annapolis. A bail hearing is set for Monday afternoon in Glen Burnie.