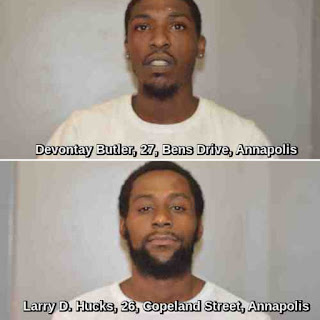 Larry Hucks, 25, of Annapolis was in the 1000 block of President Street when officers saw him.  Mr. Hucks is known by officers as well.  Prior to making the arrest, officers confirmed Mr. Hucks had an open warrant for failing to appear in court. Mr. Hucks ran away from the officers, but was quickly located sitting in a parked vehicle. He was the only occupant of the vehicle. Initially, Mr. Hucks provided the officers with a false name, although they were able confirm his real identity. Mr. Hucks was subsequently arrested for the open warrant. A police K-9 dog positively alerted officers of the presence of illegal narcotics in the vehicle. During a search of the vehicle, a small amount of suspected cocaine and a loaded handgun was found. Mr. Hucks is currently prohibited from possessing a handgun. He was charged with six criminal charges relating to possession of the illegal drugs, illegal possession of handgun and providing a false name to officers. Mr. Hucks is being held at the Jennifer Road Detention Center without bond.

This initiative was a coordinated effort between the Annapolis Police Department’s Drug Enforcement Unit and FLEX Unit under the Maryland Criminal Intelligence Network (MCIN). The Governor's Office of Crime Control and Prevention (GOCCP), provides grant funding and strategic support to MCIN member sites to identify, disrupt and dismantle criminal organizations through inter-agency collaboration and data sharing to make Maryland safer.