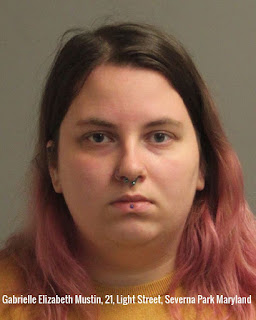 Anne Arundel County Police announced today that a fourth person has been arrested and named as a suspect in a recent Brooklyn Park home invasion.

22 year old Severna Park resident Gabrielle Elizabeth Mustin was apprehended two days after police arrested and charged three other people following a reported home invasion earlier this week.  Police believe Mustin, the confirmed cousin of the victim, was one of the four subjects that were observed fleeing an area behind the residence where the alleged incident took place.  Only three of those subjects were able to be located, the fourth subject remained at large.

Shortly after midnight on Wednesday, September 26, 2019, officers from the Anne Arundel County Police Department's Northern District responded to a home located on 10th Avenue in Brooklyn Park for a reported burglary.  When officers arrived, four subjects were observed running from the rear of the home.  Edward Paul Mustin Jr., 32, the victim in the alleged incident, required medical attention and was later treated at an area hospital for injuries not believing to be life threatening.

Ms. Mustin faces charges including: felonious assault, burglary and reckless endangerment. Ms. Mustin is currently being represented by the Public Defender's Office for Anne Arundel County, according to court records.

All four of the defendants in this case are being held without bond at the Jennifer Road Detention Center.  During a bail review hearing today, Annapolis District Court Judge Eileen A. Reilly ordered Ms. Mustin to have no contact with neither the victim nor the co-defendants while awaiting trial.