The Change Train Has Made Its Way To Annapolis, With History Writers Aboard 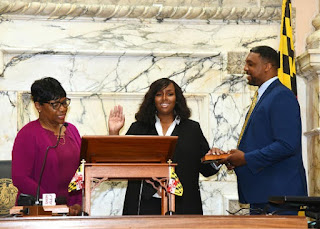 Former Ward 6 Annapolis City Councilwoman Shaneka Henson was sworn as the new District 31 representative in the Maryland House of Delegates this week, the first African-American woman to hold that seat. This change officially made Delegate Henson (pictured to the left of Speaker Adrienne Jones) the successor of the Late Speaker Mike Busch, who held that seat until he died in April after serving the district for more than three decades.


The special primary election to fill the ward 6  vacancy on the city council has been set for June 4, followed by the special general election  which will take place on July 2. 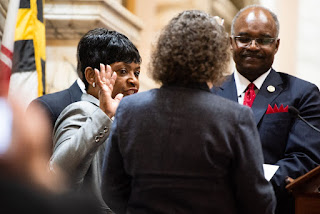 Delegate Henson was sworn in by the new Speaker of the House, Adrienne Jones.  Speaker Jones, a democrat who represents Baltimore County was appointed to the role as Speaker of the House by her colleagues earlier this month.  Ironically, Speaker Jones, the first woman and first African American to be elected to the House Speaker position, had the responsibility of swearing in her predecessor, Mike Busch in 2003.


Madam Speaker took the oath of office and replaced Mike Busch shortly after his unfortunate passing on April 7.  Speaker Jones has been serving  as State Delegate since 1997.

In addition to being an experienced Maryland lawmaker, Speaker Jones is a wife, a mother of          two and a grandmother of two.  Madam Speaker has a degree from the prestigious University of Maryland, Baltimore County and she also worked for nearly 4 decades in the Baltimore County Government prior to retiring as the Deputy Director of Human Resources in 2014.