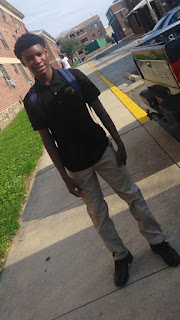 On May 21, 2018, Harris, along with three other teenage friends of his were out joyriding in a stolen Jeep. What eventually happened that day led to Dawnta's fate being placed in the hands of 12-jurors a year later.


Officer Caprio had been called to investigate a suspicious vehicle which caused her to encounter the then 16 year old timid kid. Caprio blocked his way out with her patrol car, jumped out, brandished her service-weapon and ordered him to stop. Harris cracked the door of the Jeep in a good-faith attempt to surrender. When he noticed the officer's weapon aimed directly at him, he then ducked down, gripped the steering wheel, closed his eyes and the jeep got away from his control. The officer fired once through the windshield — which missed him — before she was unfortunately run over by the vehicle.

Dawnta admitted to law enforcement that prior to his arrest, he had no idea the officer had been run-over or had even been killed. "I was just so scared. I didn't know what to do. I put my head down, closed my eyes and gripped the steering wheel," Dawnta said during the interrogation.  "I didn't even know I hit her. I was just so scared.  I really thought I was going to get shot."

“This is a classic case of being at the wrong place at the wrong time,” says Defense Attorney Warren Brown. “Dawnta Harris is an inner city black kid, who was hanging out with three of his friends, who just so happened to also be black kids from the inner city and a white woman, who just so happened to be a police officer wound up dead.” Attorney Brown went on to express his opinion about how much race played a role in this case.  "If the shoe was on the other foot and we switched this around to this being a young white boy killing a black police officer, it wouldn’t have mattered so much."

When the verdict was read, a member of the Harris family screamed out in disbelief and left abruptly, while Harris himself dropped his head down to his chest and began to cry. Defense Attorney Warren Brown leaned over and hugged the shaking-inconsolable teen, as this marked the end of an extremely stressful and emotional case, which began with a criminal indictment nearly a year ago.

Harris is scheduled for sentencing in July. Prosecutors will be seeking the maximum sentence, life without the possibility of parole. Defense Attorney Warren Brown will obviously work hard to negotiate leniency at sentencing, in addition to the standard post-conviction formalities, which normally include appealing the verdict and requesting a new trial.

THIS ARTICLE WAS WRITTEN BY: