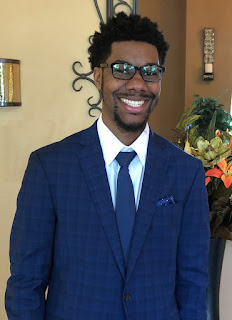 Judge Devy Patterson-Russell swore to protect and defend Marylanders honorably and fairly when he was admitted to the bar in 1991.  Now nearly 30 years later, the embattled Jurist has unarguably failed to uphold that promise and the senseless murder of Tyrique Hudson, 22, is one unfortunate example proving why.

In February, Tyrique stood before Patterson-Russell in a Glen Burnie courtroom while defending his request for court-ordered protection from his then neighbor and career criminal, James Verombeck.  Judge Patterson-Russell denied the request, despite the very compelling testimony from Hudson who expressed extraordinary reasons why he was concerned for his safety.  This week, the 55 year old employee of Anne Arundel County Public Schools was held without bail after being charged in the shooting death of his young neighbor, Tyrique Hudson.  Veromebeck reportedly shot defenseless Hudson outside of their Glen Burnie apartment complex where he was apprehended the next day. According to online court records, a court appointed attorney is currently representing Verombeck in this case.  A preliminary hearing has been scheduled for May 15 in Annapolis District Court.

James Verombeck has certainly had his fair share of time on the wrong side of the law.  A search of online court records via the Maryland Judiciary Case Search reveals that in 2010, he was charged with violating a protective order which was issued just several months prior.  In that same year, a circuit court judge signed an order ending his marriage to Ann Verombeck, whose request to legally change her last name from Verombeck to her maiden name (Soulter) was granted.  A further inspection of the online court records show weapons and reckless endangerment charges against Verombeck with dates back as far as 1996.

Judge Devy Russell was temporarily reassigned to the District Court of Anne Arundel County following  a recommendation for his suspension due to inappropriate behavior while working in Baltimore City.  According to documents filed by The Commission on Judicial Disabilities,  Russell violated state law by being verbally and physically abusive toward his colleagues.  Devy Patterson-Russell was appointed Associate Judge for the District Court of Maryland in 2006 following a career as an Assistant Public Defender from 1992-1995 and an Assistant Attorney General from 1995-2006.  According to the website for the University of Baltimore Foundation, Patterson-Russell currently serves on the organization's trustee board.