Recent High School Graduates Reflect On What Made Their Journeys Successful 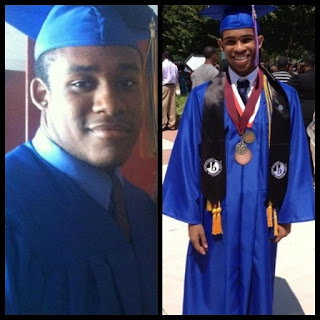 Rehvon Bryan (pictured on the left) describes the four years he spent in high school as lots of hard work, all of which paid off on June 8 when he graduated with the 2012 Senior Class of Southern Senior High School at the Showplace Arena in Upper Marlboro. Having the spirit of persistence and determination is what led Rehvon to the finish line in a race of many obstacles, including: extremely early start times, pesky standardized tests and too few snow days. Thankfully through it all, Rehvon not one time thought of taking the high road. "Getting my education and finishing school held priority in my life over everything else," he said. "Giving up or quitting school never crossed my mind." Trevor Queen (pictured on the right) is no stranger to hard work either, and he credits his success through high school with being involved in extracurricular activities. "Being involved in so many activities increased my awareness to different aspects of life," says Trevor. "It made me a well rounded person," he said. Trevor joined an elite group of alumni by graduating with honors from Annapolis Senior High School on June 12. That ceremony was also held at the Showplace Arena.

Trevor said he entered high school with one main goal, which was to go off to college on a full-academic scholarship.  "I was simply determined to make that happen." And so he did.

A month before graduating, Trevor was awarded the prestigious Gates Millennium Scholarship started by the Bill & Melinda Gates Foundation.  This need-based scholarship promotes academic excellence by providing an opportunity for outstanding minority students to reach their highest potential.  As the scholarship recipient, Trevor is guaranteed up to $1 million toward his undergraduate, graduate and post-graduate school education.

Both of these young men proved that being geniuses does not have to involve all work and no play.  Trevor maintained an impressive 4.0 GPA at Annapolis High, while an active member of the National Honor Society which he served as President, as well as the Spanish, Music and Thespian Honor Societies. Even then, he still found the time for theater, track, and music. The athletics program at Southern definitely kept Rehvon busy. Lending his extraordinary talent to the track/field, basketball and football teams landed him numerous awards, including MVP, the Bulldawg-Sportsmanship Award and a scholarship-award that is bestowed upon athletes  in the memory of a deceased coach.

Trevor says the best advice he has for rising seniors is simple, set goals early on and remain focused. Surprisingly, he said that if he had to do it all over again, he would...study more.  "Although I had a 4.0 GPA, I did not make straight A's as much as I would have liked."

An aspiring lawyer, Trevor looks forward to studying Political Science at Morehouse College. Rehvon will attend Wesley College and major in Sports Management while pursuing a career in professional football.