Locals Weigh-In On The Slaying Of A Florida Teen 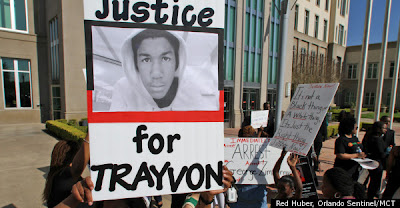 "He said, 'He is gone. Somebody shot our son and killed him.' And, I was like, 'Are you sure?'" This is how Sybrina Fulton described to New York Times reporter Charles Blow the moment she found out her 17-year old son, Trayvon Martin, had been brutally murdered.  According to the article, Trayvon's father, Tracy Martin, then began telling Ms. Fulton that unfortunately, the death of their son had been confirmed by the crime scene photos he saw, showing young Trayvon's body lifeless, still bloody and in the custody of the local medical examiners office.

The tragic shooting death of 17-year old Trayvon Martin has sparked a widespread outcry, and has sounded the alarms of racism and injustice across the nation.  On that tranquil evening of February 26, Trayvon had no idea that the few steps he had made from his father's house in Miami Florida would soon be counted as some of his last.  As the content high school student made his way back from an area convenience store with just skittles and a container of iced tea, he was confronted by 26 year old George Zimmerman.  Zimmerman, a self-appointed neighborhood watch captain, reportedly spotted "a suspicious black male, with his hands near his waistband" and was prompted to call the police.  When officers arrived moments later, an unarmed Trayvon laid dead from a gunshot wound to the chest, with Zimmerman still standing over his body, holding the nine mili-meter semi-automatic handgun, that was used to end Trayvon's life.  While admitting that he pulled the trigger, yet claiming self defense, 3 weeks later, George Zimmerman has still not been charged.

Trayvon's friends and family members arent the only people who were affected by this unprovoked act of violence.  Annapolis resident Michelle Parker says that this incident struck a very emotional chord with her, as she is now extremely anxious about the safety and well being of her own son, who happens to be very close in age to the slain teen. "Now, and more than I ever have, when my son leaves the house, I am concerned that he wont return back home to me, the same way Trayvon did not return back home to his mother."

Like many others, Ms. Parker is confident that Trayvon's murder was racially motivated.  "This young man was killed because being a black male and wearing a hoodie made him suspicious." Across the country, from New York to Florida, there has been a growing number of protests amid the concerns that the shooter's actions were racially charged and that racism plagued and compromised the police investigation. The most recent rally, led by Rev. Al Sharpton, was calling for the resignation of area law enforcement officials, and a stronger demand for George Zimmerman to be brought to justice.  Considering the questionable police conduct uncovered earlier this week, federal authorities have intervened, particularly to investigate the possibility of civil rights violations.  Gerald Standsbury, President of the NAACP-Maryland Chapter, says that there is no doubt in his mind racism played a role in Trayvon's murder.  "Trayvon Martin had committed no crime, he was doing nothing wrong. This was inexcusable," says Standsbury.  "If it were the other way around, and Trayvon had been the shooter, he would have been arrested immediately. "

Questions surrounding the criminal investigation in this case evolved the moment George Zimmerman admitted to police he killed Trayvon, but was not arrested or charged.  Law enforcement officials involved in the case are justifying their decision not to charge Zimmerman with Trayvon's murder under Florida's "Stand Your Ground" Law.  The state's "Stand Your Ground" Law allows a person to use deadly force when threatened with the reasonable belief that the other individual intends to take their life or do them great bodily harm.  "The law focuses on the subjective belief of the shooter," says Defense Attorney and Former Anne Arundel County Prosecutor, Crighton Chase.  "The question at this point of the investigation is whether Zimmerman's understanding of the situation was 'reasonable'," Chase said.

This case is expected to be taken before a Florida grand jury on April 10,  who will determine whether or not the facts presented to them by prosecutors are enough to charge George Zimmerman with murder.  Howard University Law School Dean, Kurt L. Schmoke, says that the institution is shocked by the inaction of local law enforcement, and they hope that federal authorities take proper action. In a letter to the Martin Family on behalf of the law school, Dean Schmoke writes, "Should neither of these avenues of relief through the criminal justice system materialize, we stand ready to assist you in any civil action. "