Deontae Tyree Swingler, 28, of Odenton, Identified as Victim in County's Second Homicide of the Year 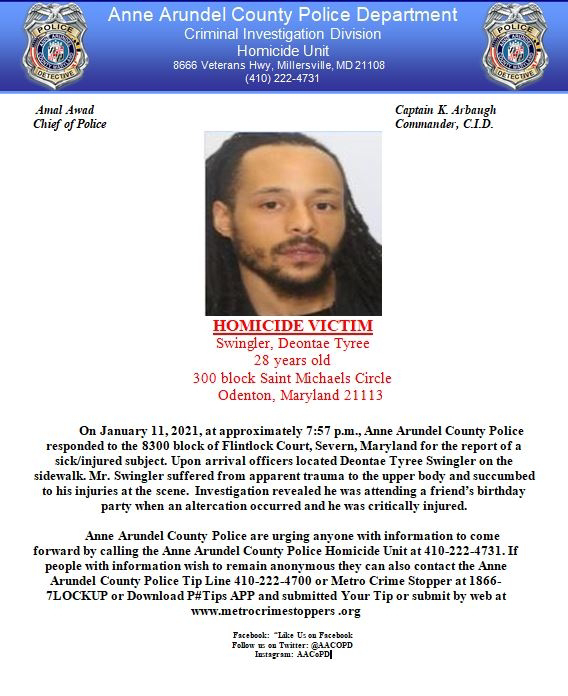 The Anne Arundel County Police Department today identified a twenty-eight year old man from Odenton as the victim in a recent homicide.
On Monday, January 11, 2021, at approximately 7:57 p.m., Anne Arundel County Police responded to the 8300 block of Flintlock Court, Severn, Maryland for a report of a sick/injured adult male. Upon arrival officers located one adult male victim lying on the sidewalk with apparent trauma and immediately starting rendering aid. Fire personnel arrived on scene and continued medical aid but the victim succumbed to his injuries. The victim was identified as Deontae Tyree Swingler, a twenty eight year old male from the 300 block of Saint Michaels Circle, Odenton, Maryland.
While on scene a witness advised the suspect who assaulted Mr. Swingler was in a vehicle getting ready to leave. Officers then stopped the vehicle where the driver and sole occupant was detained. The adult male driver, identified as Archie Sylvester Bowland III, a thirty eight year old male from the 9200 block of Bridle Path Lane, Laurel Maryland was then transported to the Criminal Investigation Division to be interviewed.
Anne Arundel County Homicide and Evidence Collection Unit personnel arrived on scene. Multiple pieces of evidence were collected at the crime scene and from the suspect. Several witnesses were located and interviewed in regards to the incident. Evidence indicates Mr. Swingler was in the area for a friend’s birthday when an altercation occurred. During the altercation Mr. Swingler was struck with an object causing injury to him.
A search warrant was executed on the vehicle operated by the suspect, Archie Bowland. Multiple pieces of evidence to include the bloody weapon, the victim’s wallet and suspect clothing was recovered from the vehicle. Based upon witness statements and recovered evidence Archie Bowland was identified as the suspect in the murder of Mr. Swingler. In working in conjunction with the Anne Arundel County State’s Attorney’s Office Archie Sylvester Bowland III was charged with the First and Second Degree Murder of Deontae Swingler. Preliminary investigation reveals this was a targeted event and not a random act of violence.
This is an active and fluid investigation where the Anne Arundel County Police are urging anyone with information to come forward by calling the Anne Arundel County Homicide Unit at 410-222-4731. If people with information wish to remain anonymous they can also contact the Anne Arundel County Police Tip Line 410-222-4700 or Metro Crime Stoppers at 1-866-7LOCKUP or Download P3Tips APP and Submit Your TIP or submit by web at www.metrocrimestoppers.org.